Are You Full of Schadenfreude? 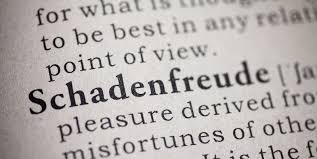 There is a term that has been battered around the interbabble lately, schadenfreude, a German word that translates to “pleasure derived by someone from another person's misfortune,” according to the Oxford Dictionary. Why have many news anchors used this term lately? After the announcement that President Trump tested positive for and is experience symptoms from the Covid19 virus many people have felt joy after hearing the news.

It’s understandable that moat people will experience schadenfreude when an apparent evil person, such as a pedophile serial killer, finally gets caught and convicted or even executed. But is it okay to have schadenfreude towards people who you may simply dislike or share different opinions over certain social or political issues? Now, I realize that there are feelings that we openly display publicly and those we reserve for ourselves or those closest to us. If a co-worker who you believe undermines your work or makes fun of how you dress gets a bad disease, such as cancer, is it okay to have schadenfreude? It is a fair question. The problem is that there is no official schadenfreude scale that can inform us on how we should feel. At the same time, should we feel guilty when we experience any kind of schadenfreude?

I believe that you need to be honest with yourself, whether your honest with the world or not, is another matter. If your true feelings are joyful when you hear about someone who you believe has acted malevolently experiences something harmful then it is an honest feeling and you should own it.  Having the feeling is okay, but openly displaying that enjoyment is another matter. My son displayed schadenfreude when he heard that President Trump was sick with the Covid19 virus and hoped he would die from it. I told him that it’s okay to feel that way but even though you do not like how the President acts you shouldn’t desire that the result of his sickness ends in death.  Yes, we can dislike what people do or say but if we wish that they get hurt or at worst, killed, then we are open for others to do the same to us.  Do you desire people who may not like you, for whatever reason, wish you dead? I don’t know about you but I would not.

You may believe that Trump is partly responsible for the over 200,000 Corona virus deaths in the United States but expressing a desire for him to die from the virus goes too far. We can feel schadenfreude, but we shouldn’t let those feelings affect our own moral balance. Know it’s okay to experience schadenfreude.  Don’t feel guilty but at the same time don’t let it escape too far from your heart.  We’re all human and if you want more people to act humanely then you must act that way yourself.

Posted by Rich Burlingham at 3:03 PM