A Road Trip Adventure Across America – Part One

When I was a kid we would watch Walt Disney’s Wonderful World of Color on channel 4 almost every Sunday.  On occasion they would present these mini documentary shorts and I recall one of them Tour of the West (first aired July 1955) was about a family’s road trip across the Western United States.  I don’t remember much of the details except for a station wagon driving on mountain roads and a strong desire to see in person all the iconic locations they visited.  Fast-forward from 1966 to 2013 and I finally decided it was time to fulfill that bucket list entry and at the same time add some nice memories to the minds of my kids.

Everyone, including my wife, thought I was crazy when I proposed the road trip, driving from Moorpark CA to East Texas and then on to Mississippi to visit grandparents, aunts, uncles, and lots of cousins. Then returning.  Even crazier was taking four or five days to get there while stopping to visit cool sites all along the way.  And even more foolish was being stuck in a car for hours on end with a five year-old boy and twelve-year old girl.  I wasn’t fazed by the negativity and knew that this would be a trip that they would remember for the rest of their lives.  I can hear them say to their kids…”I remember that trip we took with our dad way back in 2013…it was awesome!”  And perhaps they will do the same, albeit in some sort of hovercraft or personal air car using hopefully a renewable energy source. 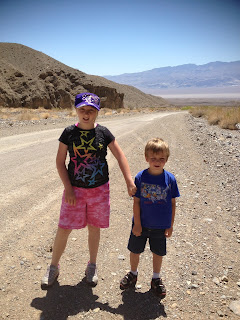 I researched and created an itinerary for the first leg of the trip: California to Texas.  I decided to document the trip via iPhone video to have a record so the kids would actually know it really happened back in ’13. I packed the Civic with bags of Capri Sun, water bottles, pillows, blankets and plenty of snacks to last days.  Each kid had their own DVD player and a bevy of DVDs and other electronic devices to keep them entertained during the many hours in the car.  As a note: Avery’s choice of movie for the entire trip to Texas was Star Wars Episode III.  I would hear light saber fights coming from behind me hour after hour after hour.  Curse you George Lucas. 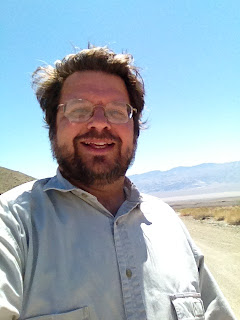 We headed out on Wednesday June 19th with our first stop targeted for Death Valley National Park, a place I’d always wanted to visit.  Out in the middle of nowhere North East of Los Angeles, Death Valley was a good first place to immerse the kids in the world of U.S National Parks.  After taking the “scenic” route, where the term road is used very loosely, we made it to the first inhabited area called Stovepipe Wells, that had a ranger station, a small general store and a hotel.  The first stop was into the store for a cold drink and bathroom break.  We quickly discovered why Death Valley is known as the hottest place on Earth.  The 110 degrees hit us like a blast furnace and even the short 20 feet walk into the air-conditioned store wasn’t short enough to stop the sweat dripping down the brow.  Even before entering I knew the gift shop portion of the store would be problematic with my kids, but as you will hear from further stops, they are obsessed with the need to get something at every gift shop known to man.  This one was no exception.  “Dad, can I get this.  Dad, can I get that.”  I settled on a few trinkets and one snack item each.  Olivia was easy.  She just wanted gum but Avery picked out a chocolate bar. I didn’t think much of it At the time, but if I learned one thing on this trip it was never buy a five year-old a chocolate bar in Death Valley.  We left the store and by the time we got to the car and drove down to purchase entry passes the next building down I discovered the reason why chocolate and 110 degree heat don’t mix.  The bar had to have melted in a matter of minutes or less and you can guess the result: Avery was covered in brown sugary mess – from his face to his hands and a bit elsewhere as well.  It took a bottle of water and a lot of tissues (which I smartly brought along – of course I also brought wet wipes but this job required heavy lubricant) and cleaned off the soiled, yet happy, young man.  Who knows how much chocolate actually made into his tummy but I managed to get most of it off.  To his mom’s chagrin, the fingernails would have to wait until bath time. 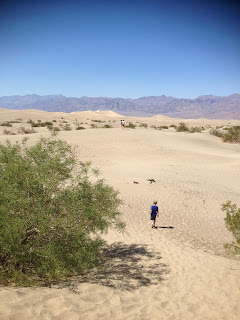 The ranger at the station suggested we start out at the Mesquite Flats sand dunes which were just down the road as a good first stop.  The view driving up was amazing – like being in some David Lean movie.  We parked and got out and walked the dunes.  Of course the iPhone 4S was out and taking pictures and video right away.  Avery, as any boy his age would do, was running up and down the dunes pretending to be Anakin Skywalker (Star Wars reference#1).  Olivia was another story – complaining of the heat, which was understandable.  She eventually went back to wait by the car.  Another discovery I found was that an iPhone can actually overheat.  After about 10-15 minutes it stopped working and a warning appeared about excessive heat.  It must be hot if your iPhone stops working.  Curse you Steve Jobs. 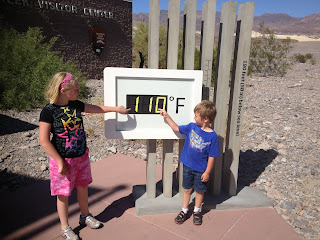 Next stop was the Visitor’s Center at Furnace Creek – the main one in the park.  Luck had it that there was one covered parking spot left – which meant a lot as this is where we found out the official temperature was 110 degreess, displayed on a large LED outside the center.  We cooled off inside.  Toured the small museum about the valley and made it out without buying anything in the gift shop.  A tribute to my resolve, though you will see this resolve erode later in the trip.  A ranger was nice enough to tell us about other places to visit that would be easy with the kids and accessible since we only had the afternoon to explore. 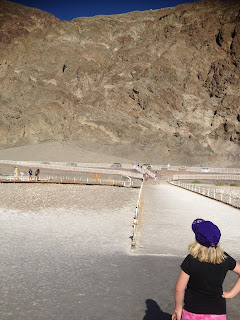 Next stop was Badwater and the one spot in the valley I wanted to visit.  It is the lowest point in North America, 282 feet below sea level.  They even have a sign up on the overlooking ridge so you can realize how low you really are.  Again, my adventurous son wanted to run all over and explore while the sensitive daughter was complaining about the heat and wanted to go back to the car.  We didn’t stay too long but it was memorable none the less. 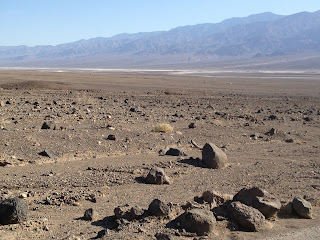 Next was a jaunt down and around Artist’s Drive with a lot of interesting geological views.  The kids got mad that I kept stopping to take pictures.  Tough.  I probably would never be there again so they can just… After the drive we headed to one of the highest parts of Death Valley – Dante’s View with a stop at Zabriskie Point along the way which gave great views of the valley.  I’m glad I remembered the Ranger telling me that on the last half mile to make sure to put the car in 3rd or 2nd gear because it was quite steep.  The views were superb but we also had our first “owee” incident when Avery tripped over a rock and skinned his knees.  Luckily, I was prepared for the need for triage and had Neosporin and Band-Aids on before you could say, “I’m stuckon Band-Aid brand ‘cause Band-Aids stuck on me.”

With the sun quickly falling down behind us we drove out of Death Valley and on the way East to our first pit stop: Las Vegas, NV.  The lights, the glitz the smelly smoke infested casino.

(Next on A Road Trip Adventure Across America: Sam’s Town, Hoover Dam and the tale of the lost briefcase.)