“The voyage of discovery is not in seeking new landscapes but in having new eyes.”
MarcelProust

We found a little respite in the middle the first leg of our road trip at the home of Joanne and Kenneth Brooks of Colorado Springs, Colorado.  A day earlier, their daughter, Johanna’s cousin Kristen, arrived with her two young boys from Arizona.  Kristin is a nurse studying for her Masters but is also an Air Force Reservist.  She fulfills all her six-week requirement in one dose, helping check in cadets at the Air Force Academy.

Our stop allowed Avery and Olivia to have some playtime with their second cousins, Braidan and Logan.  We had hoped that Dirk, the son of Kristen’s brother Mathew who is at Army captain’s school in Georgia, would also be there.  He lives with his mother but visits his grandparents frequently; but alas, this week he wasn’t there.  My two rug rats were familiar with the boys since all five cousins spent the day at Disneyland last year.

Even with the extra day added to our schedule the Colorado Springs day fell on a Sunday that allowed for a personal guided tour of local attractions.  As you recall I was a little discombobulated the night before due to an ominous car warning light and my iPhone that wouldn’t charge.  Before getting dressed I tried every outlet I could find but the phone would still not charge.  Once up and dressed, while the kids went wild playing with each other, Joanne let me try using her phone charger. Lo and behold it worked.  I was glad they weren’t Galaxy users. I soon discovered that the AC adapter I was using was faulty and if I had used Olivia’s I wouldn’t have been pushed into a panic.

After we let the kids practice military tactics with tanks and aircraft carriers that were almost life-size, a plan was made for the day.  Kristen was busy studying for a pharmaceutical test and stayed behind as the rest of us ventured out of the house.  When I got in the car and started it up I was ecstatic to find that my nemesis – that scary warning light – was gone, alleviating my fears of expensive automobile repairs.  Ding-dong the witch is dead.

The caravan’s first stop was at the Garden of the Gods, a main stay geological tourist attraction in Colorado Springs.  It’s a registered National Natural Landmark and comprised of 300-foot towering sandstone rock formations that cover the park, making it perfect for rock climbing loving preschoolers.  Since it was a summer Sunday it was VERY crowded and parking was difficult so we could only stop at one location. The kids had a blast climbing where their parent/grandparents wished they wouldn’t but boys will be boys. 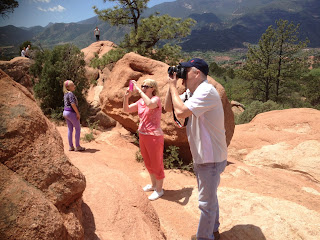 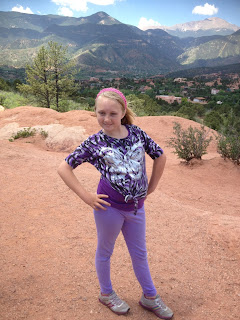 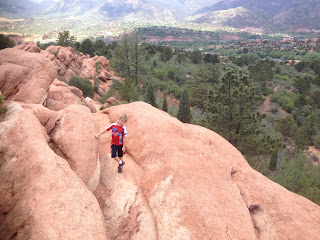 Afterwards, discovering there wasn’t a spot to park, Kenneth guided us up to a lookout spot where you had a great view of the Garden of the Gods, as well as Pikes Peak in the distance.  The photogenic background lent itself an opportunity to get all the cousins in one frame.  I wanted to also get them all pointing, which for Logan was a little challenging.  The pointing thing dates back to a photo Bob Tullier and I had of us on a set of a Nissan Diesel Trucks training video.  Bob was pointing at something and I was looking at whatever he was pointing at.  I liked the shot so whenever we had our photo taken I tried to have us replicate the pose.   I once had an office wall full of these pictures.  I have passed the baton to my son so he has to always have pictures of him pointing, joined by others at times.

Stomachs began to growl but when you leave lunch choices up to a bunch of kids you can probably guess what they’re going to pick: It rhymes with Ronald. On the way to Mickey D’s I was following Kenneth and at some point I got behind what I thought was his car, similar in color and model. I ended up on the Interstate headed south.  A few miles down the highway I figured I must have made a mistake and called them for redirection. It was a bit of Keystone Kops and all we needed to accompany was some Benny Hill music.

After a typical lunch comprised of Happy Meals and ice cream we got back into the cars and headed north to the Air Force Academy.  Avery wanted to see some planes.  Our first stop near the entrance satisfied him - a real B-52 Bomber sitting on pedestals.  It is quite awesome to see and walk under and around. 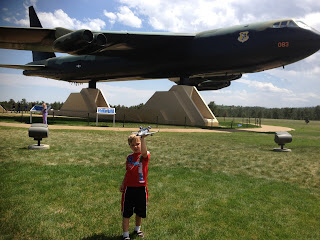 Next we stopped at the actual academy where you can walk the main quad where there are bunches of statues of various Air Force planes and luminaries. 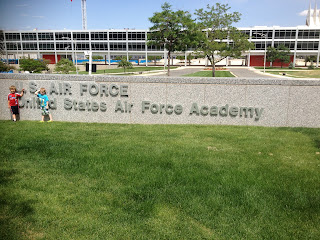 We continued towards the famous academy chapel where a local choir group was practicing and delighting tourists.  Later, upon seeing bunch of new recruits walking across campus, Avery declared that this was where he was going to college. 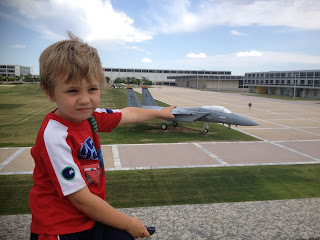 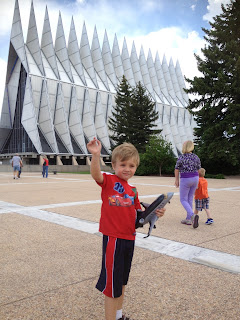 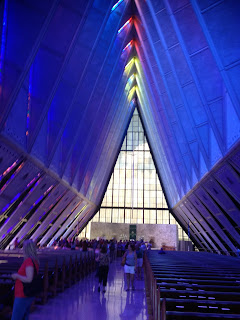 As we were touring the campus and I was explaining to Avery that this is where people come to train to become officers in the Air Force he asked me where his Poppa trained for the Army.  I explained that before going to Vietnam he trained at Fort Sill, Oklahoma - at artillery school.  This fascinated him and after some thinking he requested to go there, to see where his grandfather trained.  I quickly deciphered that we could easily reroute ourselves, adding a day to the trip so that Avery’s wish could come true.  It would mean another hotel stay but I knew that wouldn’t be a problem for Avery.

The boys were getting tired and so we all headed back to the house for some rest and a nice dinner.  I thought it would be nice to have some home cooked food or any food that didn’t have a “Mc” in front of it, for that matter.  I really think McDonald’s puts something addictive in their Happy Meals or maybe they secretly implant homing devices into every child that visits.  I’ve witnessed my offspring twitch and get starry eyed every time we pass a golden arches.  Remind me when I get home to call Morgan Spurlock about a great idea for his next documentary: “McDiction: How the Big Mac Has Become Meth for Millennials.”

I would say we had a quiet evening but with three young boys and a bored twelve year-old nothing is really quiet but it was nice for a change not to be driving down a highway with bickering kids in the back seat, but relaxing on a patio watching the planes land at the nearby airport in conversation with another adult. There was a really bad wild fire north of Colorado Springs that was still blazing and it seems it was re-routing air traffic so planes were a lot lower and a lot closer to their house that evening.  Avery joined us a bit later with a big bottle of bubbles and subsequently began blowing them around the yard.  Kenneth and I egged him on to try to blow a bubble that would go over the fence, which kept him busy.

We hit the sack early because we all had to get out of the house before or around 7am.  It was Kristen’s first day at the academy, Kenneth’s work at Fort Carson started very early and Joanne had to take the boys by daycare before heading to her job.  With the change to our itinerary I also wanted to get an early start so it all worked out well.

One request from Johanna was that the kids visit the hospital where she was born near downtown Colorado Springs.  Easy directions from Joanne got us there without a problem and we took photos to prove to Johanna of our visit.  Of course, it was early and Avery was a little cranky.  I had to bribe him with a new Star Wars ship in order to get him to smile in the picture.  What we do for posterity. 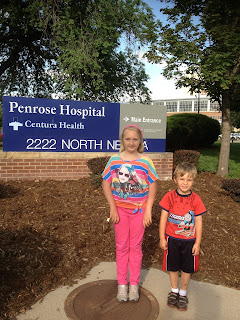 After a stop at Dunkin' Donuts for breakfast (don’t tell Johanna but tell Joanne) we got on the interstate and headed to our big stop of the day, Capulin Volcano National Park in Northern New Mexico.

(Next on A Road Trip Adventure Across America: A dormant volcano, Junior Rangers in training, and Geronimo’s grave.)

Posted by Rich Burlingham at 1:42 PM