When traveling with someone [kids], take large doses of patience and tolerance with your morning coffee.
Helen Hayes 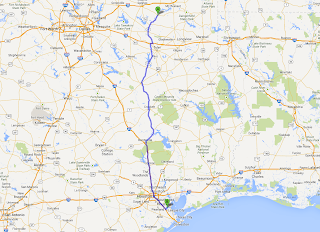 The day finally arrived.  It was time to leave the great town of Winnsboro and make our way back home.  This last leg was sketchy when I first conceived of this cross-country trip.  The only destination planned was Carlsbad Caverns and the original thought was to just high tail it back to Moorpark as quick as possible but things changed.  First, while visiting the Brooks clan in Colorado Springs we found out that Kristin and family were in the process of buying a new house in a suburb of Phoenix.   They invited us to stop by on our way back so that was factored into the equation.  Then Avery’s new love of all things Star Wars and space led me to think about visiting NASA in Houston which led to stopping in Galveston so the kids could dip their toes in the gulf waters to complete their U.S. coastal water trifecta – Atlantic, Pacific, Gulf of Mexico. (Note: Avery actually dipped his toes in the Chesapeake Bay only but I think that’s close enough).


I then pondered, since they so love Blue Bell Ice Cream, which we cannot get in California (except at Outback Steakhouses), we could take a side trip to the Blue Bell headquarters and factory in Brennan, Texas which led to thinking if we’re driving through San Antonio might as well take a quick detour and see the Alamo and while in the historical frame of mind perhaps a stop outside Tucson at Tombstone, to see the OK Corral.  Lo and behold the last leg became chock full of stuff and as crowded as the first leg.  I made some hotel reservations for Galveston and Carlsbad, NM just to be safe. So long to a fast and easy ride back.

Since we had a goal of getting back by Thursday because Olivia had to pick up her textbooks and 7th grade class schedule on Friday, we had to leave early Monday, August 12th.  I wanted to get to Space Center Houston as early as we could so we could see as much as possible - that meant waking up way too early in order to pack the car, get the kids up and dressed, eat some breakfast and say goodbyes.

We had a couple of extra passengers as in two plant cuttings from a Christmas Cactus and another cactus that were cuttings my sister gave me from cuttings she got from our cousins which came from our Great Grandmother’s original plants. That's a mouthful.  I placed them in some plastic containers hopefully secure.  We would see if they would survive the trip.

The goal was to leave by 8 am and we were pretty close, 8:20, I believe.  It was a good four to five hours to Houston with almost ¾s of the way non-interstate roads, basically a tour of East Texas going through several colorfully named towns, such as Palestine, Crocket and Trinity.

Driving into Houston I noticed the Woodlands, a Houston suburb that began in the early 80’s as this upscale housing development in the Northern piney woods is now this huge place with malls and corporate campuses with tall buildings.  I hardly recognized it.  I hadn’t driven this direction in 20 years, I realized.

We had a slight delay because of some traffic through downtown Houston - it was noontime so expected.  The skyline hadn't changed all that much since our last visit in 2005 when Olivia had surgery on her arms.

We eventually got to Space Center Houston with the entire afternoon to explore.  I was as excited as the kids since I’d never visited.  My first impression was that the buildings were very nostalgic, very 60’s and all my memories of watching every Apollo mission on TV came back to me in droves.  I never missed a space shot and was always glued to the TV.  I remember I got so mad at my sister as she turned the TV off just when they were landing on the moon (not the first time, a later mission) – she ran into the bathroom, which had a cut glass window in the door of which I banged on so hard that it shattered.  I took my space watching seriously. 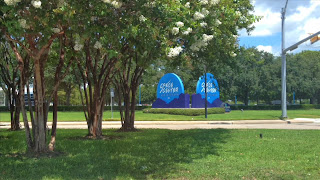 NASA was great.  We tried to follow the recommended exhibits for the amount of time we had and we pretty much saw everything on that list. 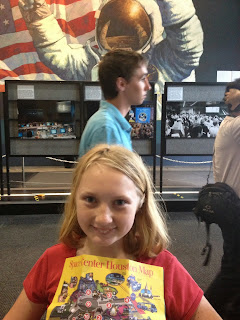 There were two facility tram tours but I made sure we took the tour to see the Saturn V rocket and the training facility.  The other took you to see the historic mission control center made famous in the movie Apollo 13 - maybe next time. I think I was more thrilled than the kids at seeing the Saturn V. 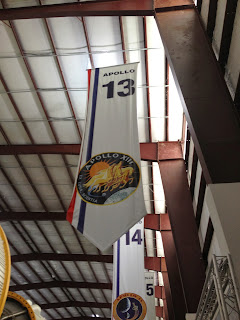 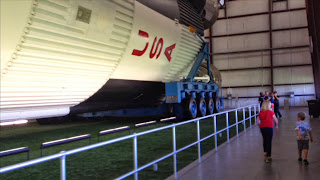 I also wanted to see the real set piece of Star Trek’s Galileo Shuttle Craft that a guy from New Jersey found in a warehouse and restored to it’s original glory.  This was the first time it was on display. As Avery loves Star Wars I had similar feelings towards Star Trek TOS.

We found out how people poop on the International Space Station and saw a moon rock.


All in all a great experience for each of us, though I think Avery loved the Star Wars Angry Birds play area the best.

We got kicked out of there as they were closing down.  Of course, the gift shop stayed open until closing time and it was NASA – so we couldn’t leave there without something.  Avery got a space shuttle (not a real one, that wouldn’t fit in the car), Olivia a t-shirt, I a baseball cap and we got mom a large Greatest Mom cup she could use for tea or hot chocolate.


We got out of there near 6pm with a goal of getting to Galveston Island before the sun went down so we could go to the beach.  Of course, the kids were hungry and even though we were only a few buildings down from the beach I figured we probably wouldn’t find a quick place to eat there.  I did check the iPhone for nearby McDonald’s but didn’t see one near the motel.  So we stopped at a McDonald’s along the interstate.  Hindsight is 20/20 and when we got to the motel – the sun setting – there was a McDonald’s right along the beach and across the street from our motel.  Go figure.  We checked-in and got dressed for the beach as quickly as possible.  We had to walk out of the parking lot and up a half block to the beach but along the way Olivia tripped on a speed bump and skinned her knee.  If we went back to the room for triage it would be too dark to go to the beach but she was a real trooper and said she could go on, blood dripping down her leg.  Actually, it wasn’t that bad.  I did have a napkin to at least clean her up a bit.  Dad saliva works as well as moms.

We got to the beach at dusk.  Avery took off into the gulf right away and was splashing in the waves.  Olivia was a little more tempered and I had to coax her into at least dipping her feet in the water, which she finally did.  Avery was going way out into the surf and I got worried because it was getting dark. 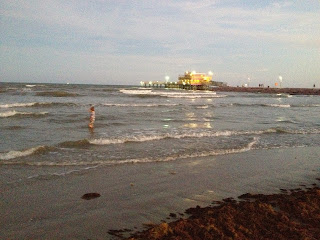 Eventually, we had to leave because it was too dark to see out in the water. 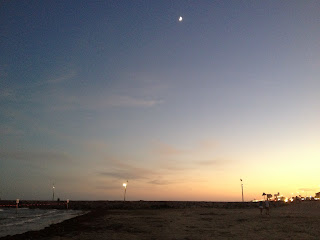 We went back to the room where we cleaned up, the kids watched a little TV before falling asleep and I downloaded footage and photos, but after talking to Johanna some disturbing news changed things a bit…

(Next on A Road Trip Adventure Across America: The run-around trying to fix a problem, exploring the bowels of Blue Bell Ice Cream, remembering the Alamo and driving 85 mph leagally.)
Posted by Rich Burlingham at 4:22 PM