"The wonders of the Grand Canyon cannot be adequately represented in symbols of speech, nor by speech itself. The resources of the graphic art are taxed beyond their powers in attempting to portray its features. Language and illustration combined must fail."
John Wesley Powell

Previously on our wondrous road adventure we had just toured the great Hoover Dam, recovered my forgotten briefcase/computer in Vegas and were finally on the road to the Grand Canyon - only 240 miles away.  I cannot praise portable DVD players and other electronic devices enough as they are saviors for parents on long road trips, though I was getting a little tired of hearing Star Wars Episode III over and over or the sounds of Star Wars Angry Birds. Not to mention Avery’s occasional desire for me to hum either the bad guys song (Darth Vader’s theme) or the good guy song (theme to Star Wars). The alternative of constantly hearing, "how many more minutes until we get there" is frightening.

Along the route Johanna was able to secure a cabin at the Maswik Lodge within the park as we had gotten behind schedule and would not be able to tour the Grand Canyon and Monument Valley in the same day.  Honestly, my itinerary was a little too tight to begin with so I wasn't surprised, even with our mishap, that we couldn’t achieve the goal.  It all worked out for the best. 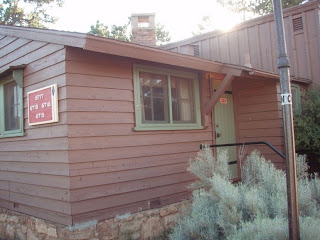 We arrived near the entrance to the Grand Canyon National Park late afternoon with no issues along the way except for some tired kids.  We stopped at a visitor's center outside the park to purchase our pass and get some advice and directions to the lodge.  It took longer to get there than I expected but we finally found the lodge - the last one in a line of about five or six.  We quickly checked in and found our cabin quickly, rushing to get all our stuff inside, get a bathroom break and then head out to take the shuttle to Hermit’s Rest, the best spot to see and photograph a Grand Canyon sunset. 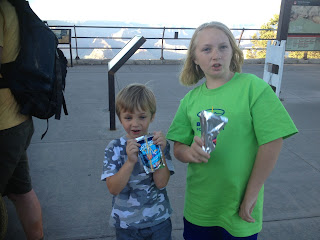 We were able to walk to the shuttle and only waited with a large crowd about ten minutes for it to arrive.  Upon getting on Avery reminded me that this was his first time on a bus and he was excited.  A lot of firsts for the five year-old this trip which was exciting to experience.  The driver informed us about the various stops along the way and the best spots for photos.  He also stressed about the return trip and that if you miss the buss you have a long walk back in the dark.  We didn't want that to happen.  There was a stop, Pima Point, before Hermit’s Rest and it looked like a good spot to take pictures.  We had about 30 minutes before sunset so we debarked and proceeded to see the spectacular Grand Canyon in the golden showers of a dropping sun.  It was quite remarkable and as John Powell said in the quote above it truly is difficult to describe in words.  These pictures do say a lot more than I can describe so I will let them speak for themselves. A girl from Germany was nice enough to take pictures of Avery and I, as Olivia was too scared to go out near the edge of the rim. We did rush to Hermit’s Rest and arrived in time for sunset.  It was crowded with people from all over the world all-looking Westward.  Avery had a good time jumping around on the rocks and scaring me as he went out of eyesight.  In crowds parents are always a bit cautious, especially in the Grand Canyon where one false move and down you go hundreds of feet over a cliff.  My only wish was to have had a better camera to capture the view as I did on my previous visit.  One of my shots from that shoot won a ribbon at local Dallas photography contest back in the late 90's. 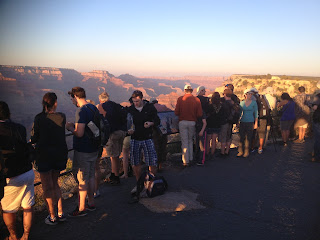 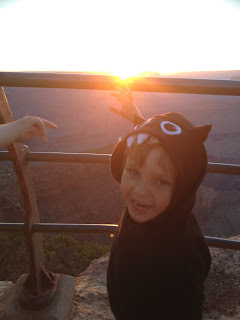 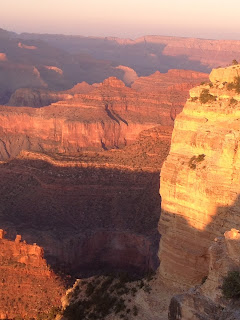 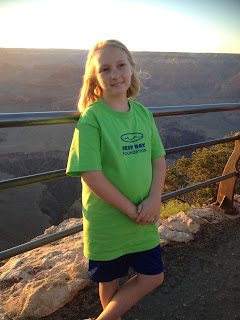 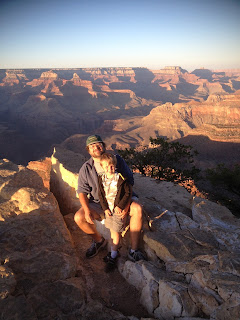 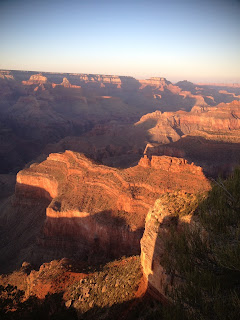 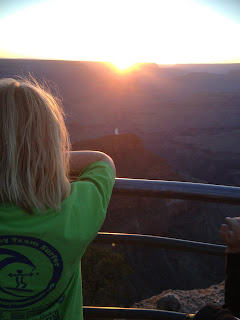 No issues getting back to the lodge where we sought out a place to eat and chose the pizza place because I knew Avery would eat pepperoni pizza.  This may have been a mistake since the place was over flowing because the final game of the NBA finals between Miami and San Antonio was live on all the screens.  We got in line and by the time we got our pizza and drinks the Miami Heat had won the championship...about an hour wait.  We took our pies and retreated to eat in the cozy cabin for a relaxing night.  The only issue was not enough electrical outlets for the kids to both watch their DVDs.  They had to sit on the floor while I downloaded all the pictures and videos from the previous two days.  I found out I can easily max out my camera with all the video I was shooting and would have to download every evening from that point on while on the road.

We got up early, cleaned up and packed the car ready to do more exploring before heading to Monument Valley.  Of course, the gift shop was strategically placed across from the check out desk.  I will say this now if I don’t see another gift shop in my life I will be a happy camper.  At times I think the kids were more excited about the gift shops than the sites.  I figured we’d stock up on gifts for the family here and not have to worry later.

Now with a lighter wallet we drove to the main Visitor’s Center, saw a cool introduction show projected on a moving globe and then a film about the history of the Grand Canyon.  We then walked to Mather Point, probably the most visited view area of the park but no less spectacular.  Avery enjoyed climbing all over the rocks wherever he could and Olivia became a little less scared and enjoyed the vistas.  I would like to return when Avery is older so that we could take the mule tour down into the canyon but we would need a few days to really take in all of the Canyon or perhaps one day a boat tour down the Colorado River through the Canyon – now that would be fun. 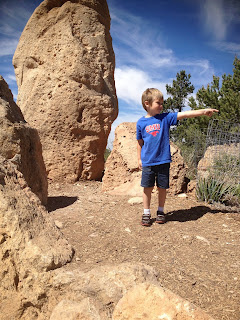 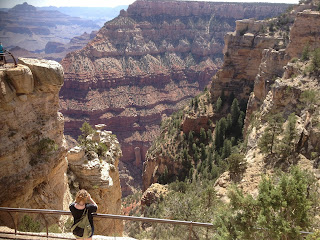 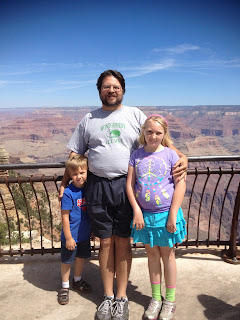 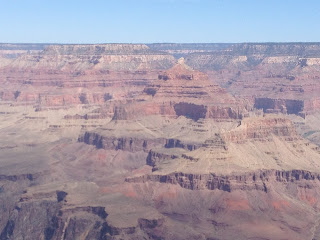 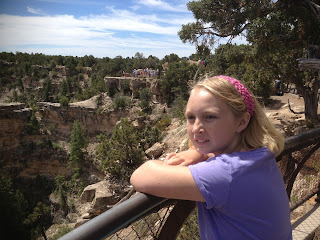 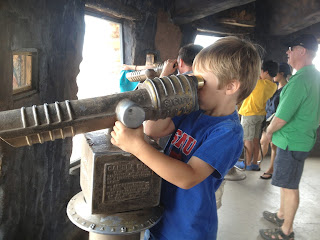 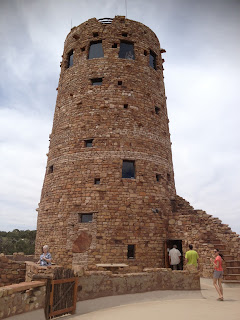 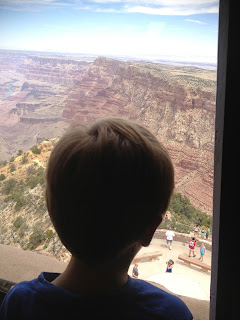 We got back in the car and headed down Desert View Drive to Desert View Point, another suggested viewpoint and one of the highest spots in the Canyon at 7438 ft. elevation. Of course, Dad had to stop along the way to take pictures and video at various points to the kid’s chagrin.  They had their EDs (electronic devices) to keep them company.  We got to Desert View, which would be our last Grand Canyon excursion.  Much like the main Visitor’s Center, Desert View has it’s own center, trading post and eating establishments but it also has the Desert View Tower – a stone structure that you can walk up stairs to various viewing areas for some nice views East and West.  As usual Olivia was reluctant to climb the stairs and stayed in the gift shop while Avery and I ascended with glee.  We were not disappointed.  We did get Olivia to come up to the first level plaza and then I think the hardest thing was getting back through the gift shop without buying anything – I think I deserve a medal for that.

The routine continued as we jumped back into the car for another long trek northeast to Monument Valley, a three hour drive broken up by another stop at McDonald’s in Kayenta before heading up Highway 63.  This was Navajo country and pretty bleak but picturesque.   I’m not sure if the kids really took in the incredible topography and geological wonders but I’m sure on reflection when they’re older they will realize it was quite special to witness that part of the country.

MonumentValley had changed since I last visited back in the late 90’s with a new hotel and visitor’s center.  We took a look inside before driving the famous dirt road and this time I couldn’t leave without a few trinkets.  We retreated to capture the incredible views of the buttes that have made this place famous.  The many John Ford/John Wayne movies, as well as other more recent films such as Forest Gump have cemented the place as THE iconic western vista that you think of when you think of the American West.  As we look out I can almost see the wagon trains and cowboys making their way across the horizon.  I can’t say much more so here are pictures to say it better. 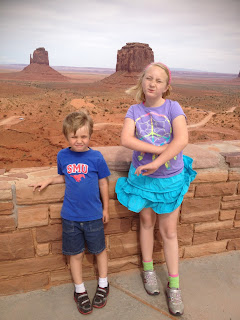 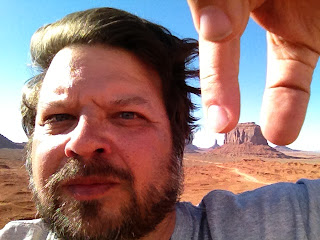 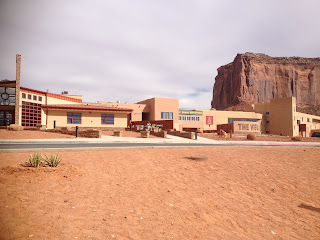 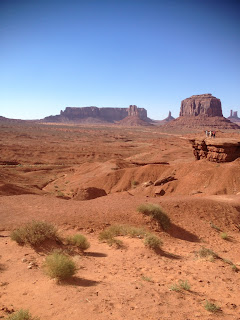 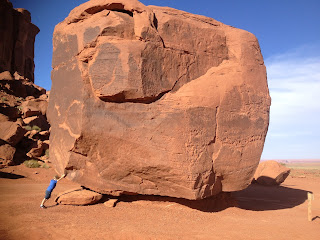 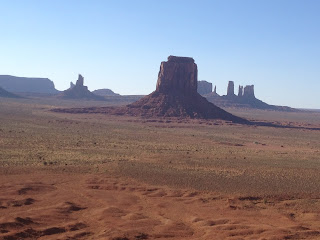 The Honda took a beating driving the dusty dirt road through the Valley.  A cake of red dust was all over the inside dash and I’m sure everywhere else. On the way out I even got stuck for a while going up a hill as the thick dirt had the wheels spinning.  Some careful maneuvering and I was able to get us out and back onto asphalt without having to call the cavalry…or actually the Navajo guides who would have probably laughed at me. 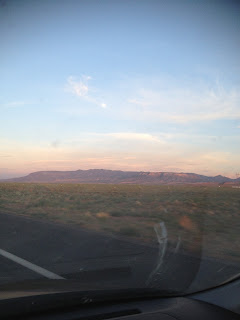 It was getting late and the sun was dropping quickly.  I wasn’t sure if were going to be able to get to Four Corners – where Utah, Arizona, Colorado and New Mexico all meet.  We got on the road and headed east to at least try.  I watched the sun drop and the moon rise while the shadows kept getting longer and longer on the desert.  The red rocks began to glow in the sundown light and the though the signs said we were getting closer it wasn’t looking good.  Then the sun was gone and as the light of dusk enveloped us I arrived at the Four Corners site only to see that it was closed.  In my mind it was some simple monument that didn't require security, but I guess I was wrong.  I shot some video of the sign just so I could prove that at least we were near and turned the car around to head to Farmington, New Mexico where we had a reservation for the night.  In the dark you couldn’t see much but it didn’t look like there was much to see, anyway.  We got in late and the room was simple but the bed felt good, none-the-less.  A little TV and a little fast dinner and we were all quickly in dreamland or in my case snoring up a storm.

(Coming up on The Road Trip Adventure Across America: Bandelier National Park, heat exhaustion and a car dash alert that drove me crazy.)

Posted by Rich Burlingham at 4:57 PM