“Travel, in the younger sort, is a part of education; in the elder, a part of experience.”
Francis Bacon

One of the goals of this road trip was to expose more of the world to my children and so far I have succeeded in doing that quite well, I believe.  They have seen a lot more of the United States than I had at their ages and I hope when they reach their adult years they will have fond memories of this trip.  As far as I’m concerned it has been quite an experience for myself, as well, not only because I was able to see the world through young eyes but, in no disrespect to Sir Francis Bacon, the educational value was high for me, too. 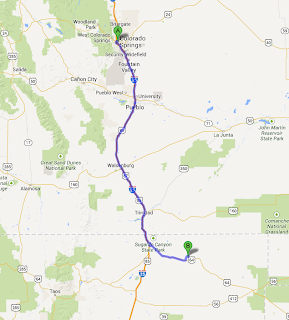 My last entry had us leaving Colorado Springs heading south back to New Mexico. In the two times I crossed the Raton Pass both were at night and so it was nice to actually see it in the light of day. 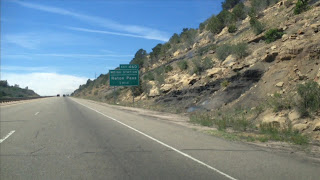 After filling up gas and stomachs in Raton we got on Highway 87/64 towards the panhandle of Texas but we first had a scheduled adventure at Capulin Volcano.  Olivia studied volcanoes in 6th grade and we actually built one – a cross sectioned volcano that was supposed to show how the lava moves up through the tubes and comes out on top and through fissures. I had rigged a system using a turkey baster so that when squeezed the air would push orange liquid up the clear tubing to simulate an eruption.  In a rush to get it done before her project deadline I wasn’t able to test run the system.  I left it up to the class to be test pilots.  Olivia claimed it sort of worked but not so much.  Oh well, it was a nice father-daughter bonding project and like most of those go, Dad did most of the work.  “Olivia, hand me the pliers, please…Olivia?  Olivia where are you?” 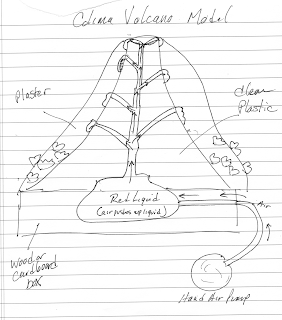 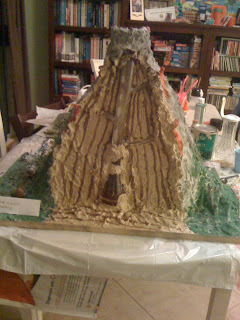 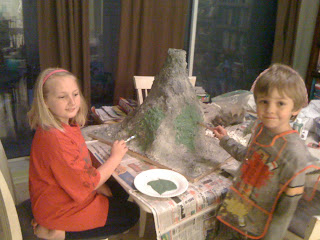 Olivia did learn a lot about volcanoes and was passionate about the knowledge so I thought she’d like to see a real one, albeit a dead one.  A live one, as Avery says, “would be REALLY hot and we’d burn up like Anakin Skywalker.”  Yes, after watching Episode III more times than George Lucas ever did he was well versed in what lava can do to a person if you get too close.

Chugging away down the highway I expected better signage.  I could see the volcano looming to the side of us and a small grouping of structures that could have been a town…sort of, I guess.  I didn’t see a sign so I went right past the road that led to Capulin.  After seeing the volcano fade in the distance behind us I kind of figured out I made a mistake and quickly turned around.  Duh!  There was a sign, though it was easier to spot when you’re looking for it. 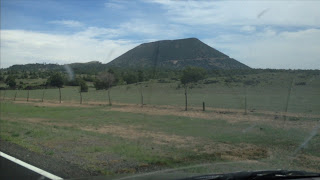 We finally found the entrance to the park and drove up to the visitor’s center. 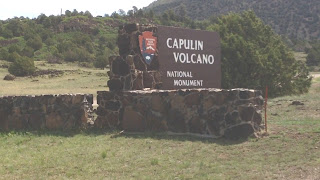 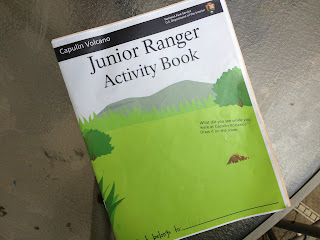 Avery’s was fairly easy.  He just needed to identify certain things while hiking the park, such as flowers, bugs and shrubs pictured in the booklet.  If he could spot a ladybug he would get a special commendation.  Olivia’s was a lot more involved:  She not only had to identify plants and animals but answer fill-in-the-blank questions, arrange a geological timeline, answer questions from what she observed in the visitor’s center and a video that runs on a loop, as well as all the field work.  They seemed surprisingly eager to win their certificates and to do all the work.  We saw other kids come in who had just finished their booklets and I was surprised at how enthusiastic they all were.  It’s a very good program so kudos to the U.S. Park Service outreach. 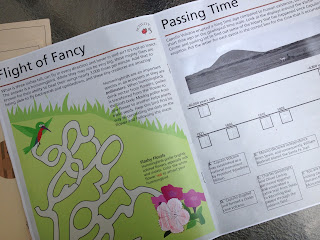 The ranger told us to drive up to the top of the mountain and we could hike around the rim of the volcano crater and down into the crater, as well.  There was also a ranger talk scheduled in a little over an hour.  That would give us time to hike and work on their Junior Ranger requirements first.  We got back in the car, booklets ready for exploring. 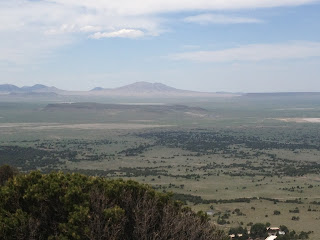 I could see us in an episode of Dora the Explorer chugging up and around the volcano in our animated blue Honda. If Olivia was Dora and Avery Boots then I must be Benny, “a lovable six-year-old bull with a big heart”. 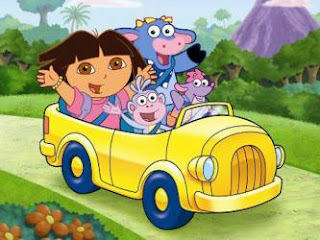 Great views of the valley could be seen 350 degrees as we meandered around the volcano to the top.  It wasn’t crowded, which was nice.

There were only a few others around when we got there so we kind of had the place to ourselves.  It was warm but not too hot as we first ventured down into the cone, which was about a quarter mile hike. 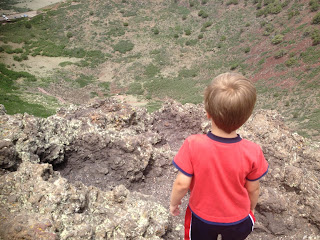 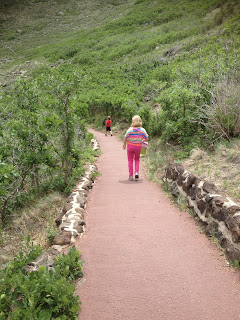 Avery spotted a bunch of items on his list, such as the tent worms and cactus.  It was interesting being down at the bottom and thinking of what it looked like when it first erupted.  As Avery pointed out we would have been in the middle of the lava and burned up. 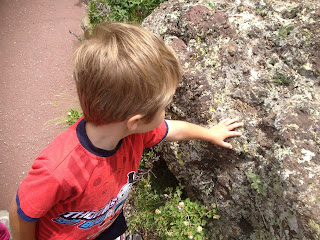 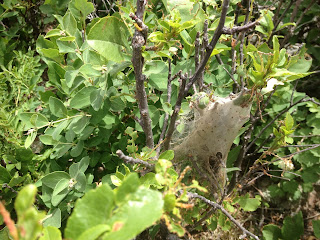 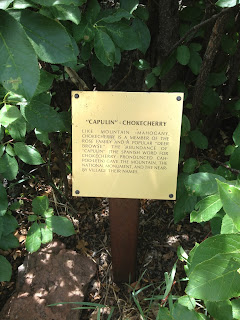 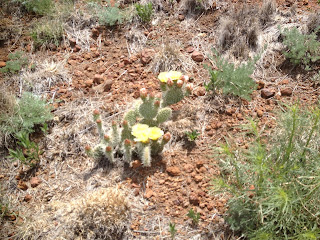 On the walk back up the trail Avery somehow spotted a ladybug.  I’m not sure how he did it - we were just walking and he blurted out, “Ladybug!”  I guess because he was closer to the ground it was a touch easier, but the tiny orange creature was sitting on a dry grassy plant in the shadows of a shrub. I’m gonna have to start calling him Hawkeye.  I took a picture to prove Avery’s discovery to the ranger and I didn't think I captured it. The bug flew away before I could get another one.  Luckily, the ranger believed us and awarded Avery a special ladybug button when we got back to the visitor’s center. On later inspection the ladybug was visible in the picture so here it is to prove Avery's perfect eyesight.  Look closely at lower half in the middle. Way to go, Avery, Ladybug Hunter. 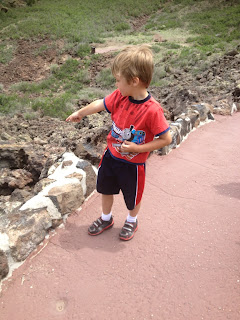 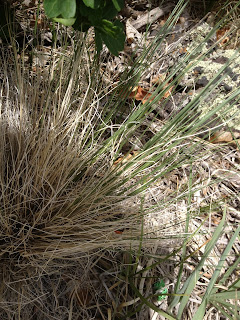 Next was the hike around the rim of the cone, which was about three fourths of the total circle.  It was a fairly hard hike because of a lot of ups and downs but we were able to blaze the trail, though a little weary at the end.  A sign read that it took about an hour to hike so we’d be able to get back in time for the ranger talk. 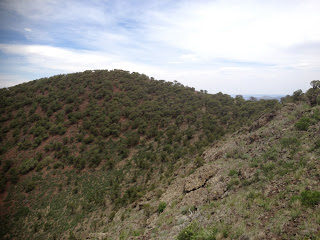 It didn’t take long for the kids to start fussing.  Avery wanted to be carried (I don’t think so 45 pound boy) and since Olivia was so sweet all the bugs in Capulin swarmed around her.  She is deathly afraid of and detests bugs and lets everyone know it in a 4 square mile radius.  At least we had all the discovery signs along the trail that kept their interest, as well as their Junior Ranger duties to fulfill.  I tried to be a good platoon leader and encourage them along the way, giving them rest stops and some history and science lessons.  Olivia kept getting worse and worse but at least she was aware that she was quite annoying.  She apologized and asked if I was mad that she was upset about the bugs, which I appreciated.  I encourage them to be aware of how they affect those around them. 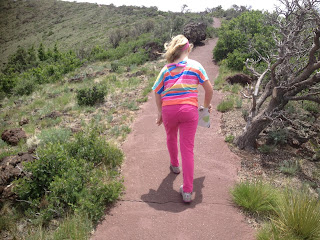 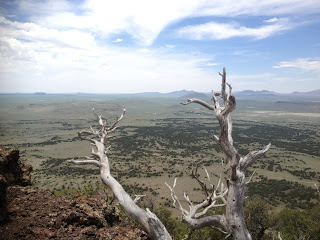 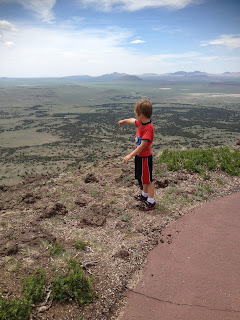 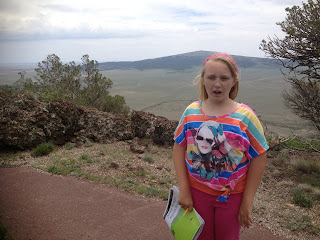 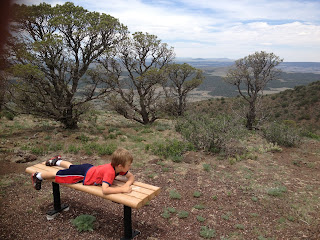 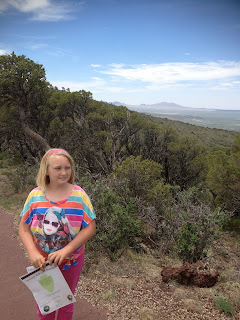 All in all, I think the kids enjoyed the hike but were glad when we got back to the staging area/parking lot.  While filling water bottles at the water container we saw the ranger had arrived.  Perfect timing.  There was another family, along with the three of us, for the talk.  The ranger reminded me of my cousin Justin in both a physical way and the delivery of his speech.  He told us all about the history of the volcano and that part of New Mexico.  It seems two real-life cattle dealers, Charles Goodnight and Oliver Loving forged a cattle trail that skirted the volcano.  They would make a camp there because it afforded a high spot to check for bands of Indians prone to attack white people and their cattle. 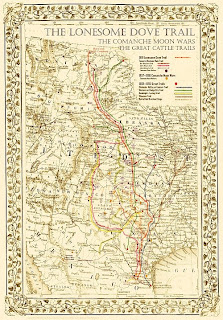 He also told us that Goodnight and Loving were the basis for the characters in the book and miniseries Lonesome Dove, played by Robert Duvall and Tommy Lee Jones.  I did not know Lonesome Dove was based on real people and events.  And it was nearby where Loving was killed by Indians and asked Goodnight to take his body back to Texas (poignantly recreated in the miniseries).  I always thought the terrific author and Arthur, Texas bookstore owner, Larry McMurtry, made the story up (I met him back in the 90’s), but history is a great source for material and he enhanced it perfectly.  Zach also told us about famous outlaws, train robbers, that hid out there and other interesting stories.  I enjoyed the talk and learned quite a bit.  Thanks Ranger Zach.

After the talk we headed back to the visitor center.  Olivia needed to finish some of the tasks in her booklet first.  While Avery perused the gift shop I helped Olivia complete what she needed.  It didn’t take too long and both kids presented their booklets to Ranger Lynn.  She looked it over and asked if they had found any ladybugs, which big sister Olivia blurted out with pride that her little brother did find one.  Avery received the before mentioned ladybug button along with their Junior Ranger certificates and patches.  Then Ranger Lynn asked them to raise their hands and they got sworn in as Junior Rangers, repeating the oath.  Dad was proud…which allowed the kids to convince me of getting a bunch of stuff in the gift shop, like ranger hats and t-shirts, volcano book and volcano making kit – all in the name of education, right?  They deserved it. 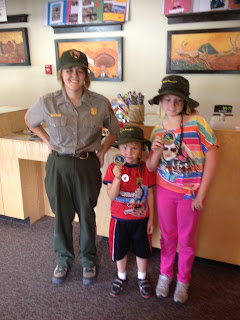 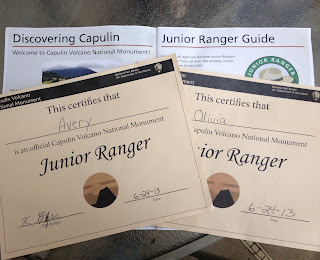 After our volcano adventure it was back in the car and the long trip to Lawton, Oklahoma to see where Poppa trained.

(Next on A Road Trip Adventure Across America:  Fort Sill and finally we get to Winnsboro just in time for dinner)

Posted by Rich Burlingham at 2:44 PM